The National Cadet Corps is the Indian military cadet corps with its Head Quarters at New Delhi. It is open to school and college students voluntarily. The National Cadet Corps in India is a voluntary organization that recruits cadets from high schools, colleges, and Universities all over India. The Cadets are given basic military training in small arms and parades. The officers and cadets have no liability for active military service once they complete their course but are given preference over standard candidates during selections based on the corps’ achievements.

“I do hereby solemnly promise that I will serve my motherland most truly and loyally and that, I will abide by the rules and regulations of the National Cadet Crops. Further under the command and control of my commanding officer I will participate in every camp most sincerely and wholeheartedly”.

We the cadet of the national cadet corps, do solemnly pledge that we shall always uphold the unity of India. We resolve to be a disciplined and responsible citizen of our Nation. We shall undertake positive community service in the spirit of selflessness and concern for our fellow beings.

During the 1965 and 1971 wars with Pakistan, NCC cadets were the second line of defense. They organized camps to assist the ordinance factories, supplied arms and ammunition to the front, and were used as patrol parties to capture the enemy paratroopers. The NCC cadets also worked for hand in hand with the Civil Defence authorities and actively took part in rescue work and traffic control. After the 1965 and 1971 Indo-Pak wars, the NCC syllabus was revised. Rather than just being the second line of defense, the NCC syllabus laid tremendous stress on developing leadership qualities and Officer-like qualities. The military training which the NCC cadets received was reduced, and greater importance was given to other areas like social service and youth-management. 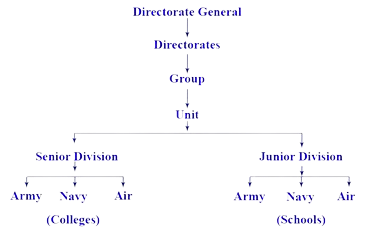 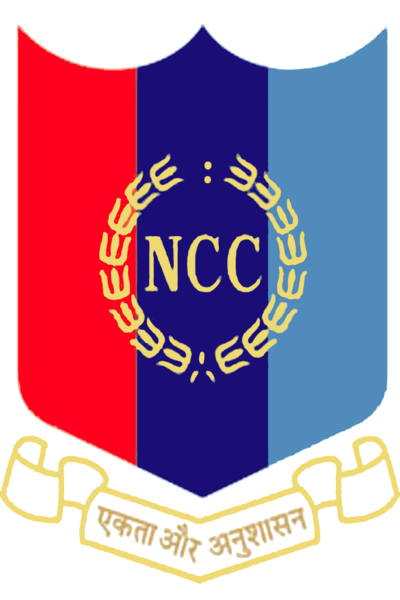 All others who joined NCC are commonly called Cadets.

This training is mostly carried out in schools and colleges by the cadets. Besides, depending upon the type of service, basic knowledge of that service is imparted to the cadets, e.g., gliding, powered flying for Air Wing cadets and boat pulling, sailing for Naval Wing cadets form part of institutional training. These activities comprise approximately 50% of the entire syllabus.

This is the essential aspect of NCC Trg and emphasizes institutional trg to be given. State DDG’s to issue comprehensive instructions on organizing the Institutional Trg at Gp / Unit level.

Following actions will be taken to improve the standard of trg.

Cadets must be made to understand the aim and purpose of teaching drills so that they are suitably motivated and do not take it as “fatigue.” Emphasis will be laid on correct bearing, marching, saluting, and arms drill. Inter-squad competitions may be organized to create interest.

Cadets generally take a keen interest in weapon training and firing. Units must liaise with nearby Service and Para-Military Units to ensure that all cadets get an opportunity to fire their authorized ammunition. Use of firing simulators may be made to optimize trg efforts where possible.

Adventure activities have been incorporated in NCC training to inculcate and strengthen leadership traits amongst the cadets. These activities in NCC can be broadly divided into the following.

This is a significant activity. It is done to increase international understanding and bolster awareness. These exchanges are done with the NCC community of 10 countries, namely Australia, Bangladesh, Bhutan, Canada, Maldives, Nepal, Singapore, UK, Russia, and Vietnam at an international level.

NCC has adopted community development activities to imbibing amongst cadets selfless service to the community, dignity of labor importance of self-help, need to protect the environment, and assist weaker sections of the society in their upliftment. This was envisaged through programs involving

This HQ has issued the eligibility conditions and the general procedure for the Certificate Examination for Cadets of Senior and Junior Division/Wings NCC(All Wings) from time to time. This Directive aims to consolidate all such instruction and revise these, where necessary.

For “A” Certificate Examination(Junior Division)

Must be in the Second year of NCC

Must have attended an Annual Training Camp

Break in the NCC Service of the cadet before he appears. In the examination ‘should not exceed more than 12 months at one time, to count his previous service. In case the break exceeds 12 months, the following procedure will be adopted
“If he has been on the unit rolls for a minimum of two years before his discharge and had attended 75% of the total period during his NCC Service, he will need another 45 periods of training to become eligible for a certificate ‘A’ examination. In all other cases where the above conditions are not fulfilled, the cadet must attend a minimum of 75% periods of the first and second year of training”.

For “B” Certificate Examination(Senior Division)

Cadets possessing an ‘A’ Certificate will be awarded 10 bonus marks.

The cadet must have attended a minimum of 75% of the syllabus’s total training period for the first and second years for Senior Division Wing NCC (All Wings). Break in the NCC service of the cadet SD/SE before appearing in the exam should not exceed more than 18 months at one time, after his discharge, to count his service for Certificate ‘B’ Examination. In case the break exceeds 18 months, the following procedure will be adopted.

“If he had been on the unit rolls for a minimum of two years before his discharge and had attended 75% of the total periods during his NCC service, he will need another 45 periods of training to become eligible for certificate ‘B’ Examination. In all other cases where the above conditions are not fulfilled, the cadet must attend a minimum of 75% periods of the first and second years of training.”

An Air Wing Cadet must do a minimum of 10 Glide launches.

Cadet must have passed ‘B’ certificate.

The Cadet must have attended a minimum of 75% of the periods of the 3rd-year syllabus during the academic session.

Break in the NCC Service of the SD/SW Cadet before appearing in the exam should not exceed more than 18 months at one time, after his discharge, to count his previous service for Certificate ‘C’ examination. In case the break exceeds 18 months, the following procedure will be adopted

“If he had been on the Unit rolls for a minimum of two years before his discharge and had attended 75% of the total period during his NCC service, he will need another 45 periods of training to become eligible for Certificate ‘C’ examination. In all other cases where the above conditions are not fulfilled, the Cadet must attend a minimum of 75% periods of the first and second year of training.”

Must have attended two camps.

Permission to Appear in Certificate Examination after Discharge

The ex-cadet so eligible can appear for the examination at any place in India by applying for the same, alongside with discharge certificate, to Local Unit Commander. The Group Commander is empowered to accept such requests from the ex-cadets.

To give Cadets a chance to apply for the NCC Special Entry Scheme, in case their grading improves, it has been ruled that Cadets who have obtained a ‘C’ grading in NCC’ C’ Certificate Exam and who wish to improve their grading will be allowed to appear for a re-test. Only one re-test will be allowed. Cadets will have to re-appear incomplete examination. A re-test will be held along with new cases next year. During the period, these Cadets may attend at least two weeks’ Special Parade/Coaching classes to be organized by units after the academic session. Those Cadets who do not attend the Special Parade/Classes will also be eligible to appear in the re-test. No refreshment or other allowance will be admissible for these classes/parade/re-test.

The Sahara Group has instituted an annual Sahara scholarship scheme of Rs. 1 Crore to be given out as scholarships per annum to NCC cadets.

Scholarship for cadets passing Class X examination and fulfilling the laid down eligibility criteria. Two Rs 6000/- each for one year will be awarded to JD and JW cadets per NCC Group. The total number of scholarships will be 368.

Scholarships for cadets passing 10 + 2 or equivalent examination admitted in regular graduation courses recognized by the UGC viz BA B Sc, B Com, BCA, BBA and fulfilling laid down eligibility criteria. Two scholarships of Rs 12,000/- each for one year will be awarded to SD and SW cadets per NCC Group. The total number of scholarships will be 368.

Scholarships for cadets passing 10 + 2 or equivalent examinations are admitted in professional courses recognized by the Government and UGC viz Engineering, Medical, Business Administration, Hotel Management, etc., and fulfill the laid-down eligibility criteria. Sixty-six scholarships of Rs 30,000/- each will be awarded for one year typical for Boys and Girls. Distribution of these scholarships between various States and Union Territories will be based on NCC Groups per State/ UT.

(a) Should have passed class XII in the preceding two years.
(b) Marks of class XII to form the basis of merit.
(c) Should have done two years of NCC.
(d) Should have 80% attendance in NCC.
(e) Admitted to any of the following professional courses recognized by Govt/UGC.
(i) Engineering
(ii) Medical
(iii) Hotel Management
(iv) Business Administration
(v) Fashion Designing
(vi) Journalism
(vii) Mass Media
(viii) MBA

The society grants 500 scholarships of Rs 5,000/- each to NCC Cadets who excel in academics. The vacancies are allotted to all states based on the enrolled strength of each state.

The eligibility conditions for the award of scholarships are as under

Cadets should have passed the 10th standard or equivalent examination in the preceding academic year to which the scholarship pertains with 70% marks in aggregate. They should have undergone training for at least two full years with a minimum of 80% attendance in each year with exemplary discipline.

Cadets who have passed Intermediate or Senior Secondary (10 + 2 pattern) examination or Pre-Degree /PreUniversity/Second-year course of Graduate Degree Examination or Diploma Course in Polytechnic are eligible for awards. The available scholarships in each Directorate are to be equally divided between Arts / Commerce and Science Stream cadets. In case of non-utilization of scholarships by cadets from any stream, the unutilized number will be transferred to the other stream. Science stream cadets should have obtained 70% marks in aggregate, whereas Arts/Commerce Stream cadets should have obtained 60% marks. As in the case of JD/JW cadets, SD/SW cadets also should have undergone NCC training as SD/SW cadet for at least two full years continuously with a minimum of 80% attendance in each year with exemplary discipline

Relaxation of 5% marks to the minimum laid down for each category is given. SC/ST/OBC cadets are also eligible for a bonus of 10% on the marks scored if the cadet otherwise obtains the minimum percentage as laid down.

4) Extra Concession of 5% is given to cadets belonging to J&K, North-East Region, and Sikkim.

Incentives are given to cadets during recruitment in other organizations

Certificates possessed by the candidates

Indian Navy as an Officer

Indian Air Force as an Officer

2.  The details given above are subject to change and should be treated as a guide only and not authority. 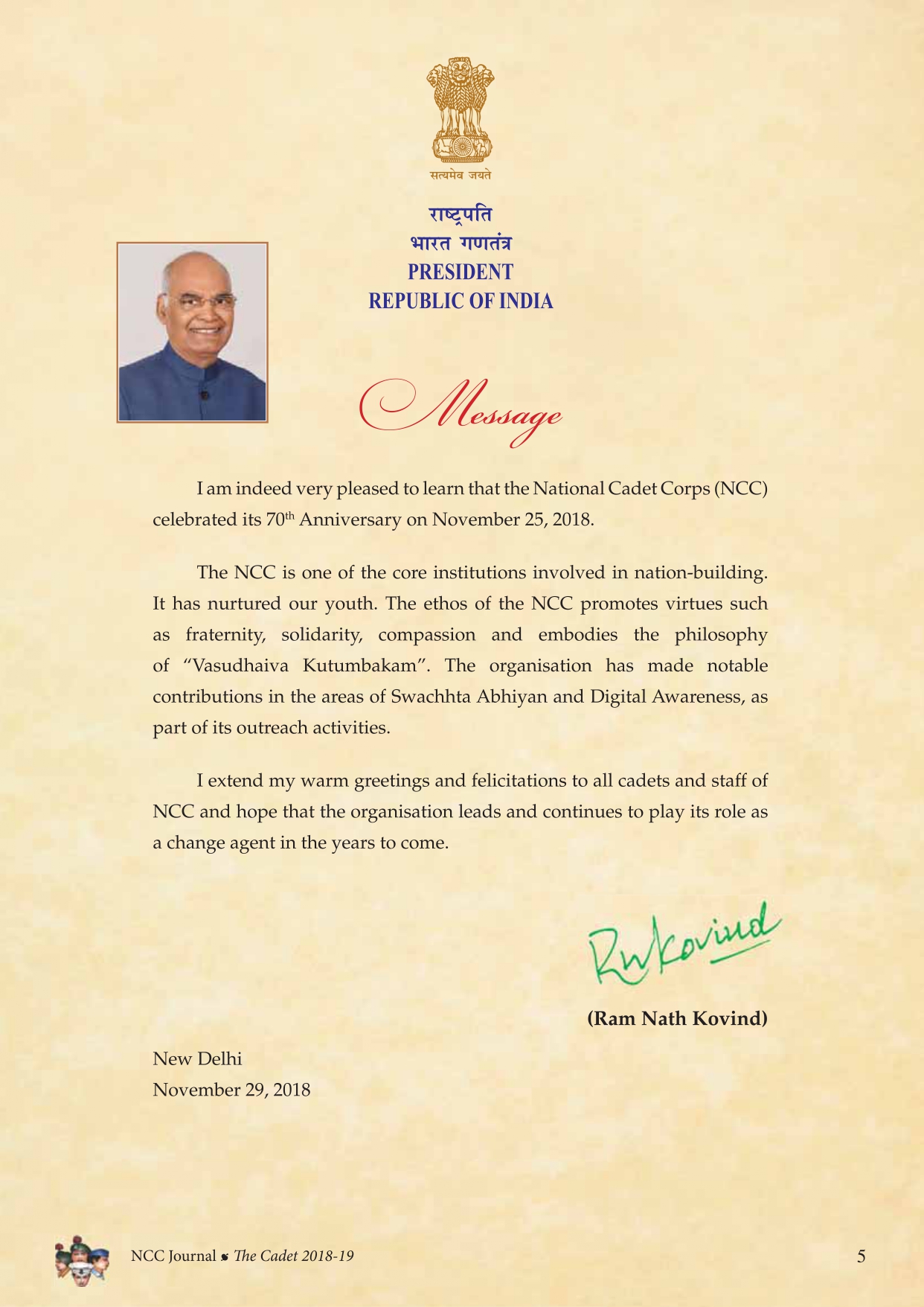 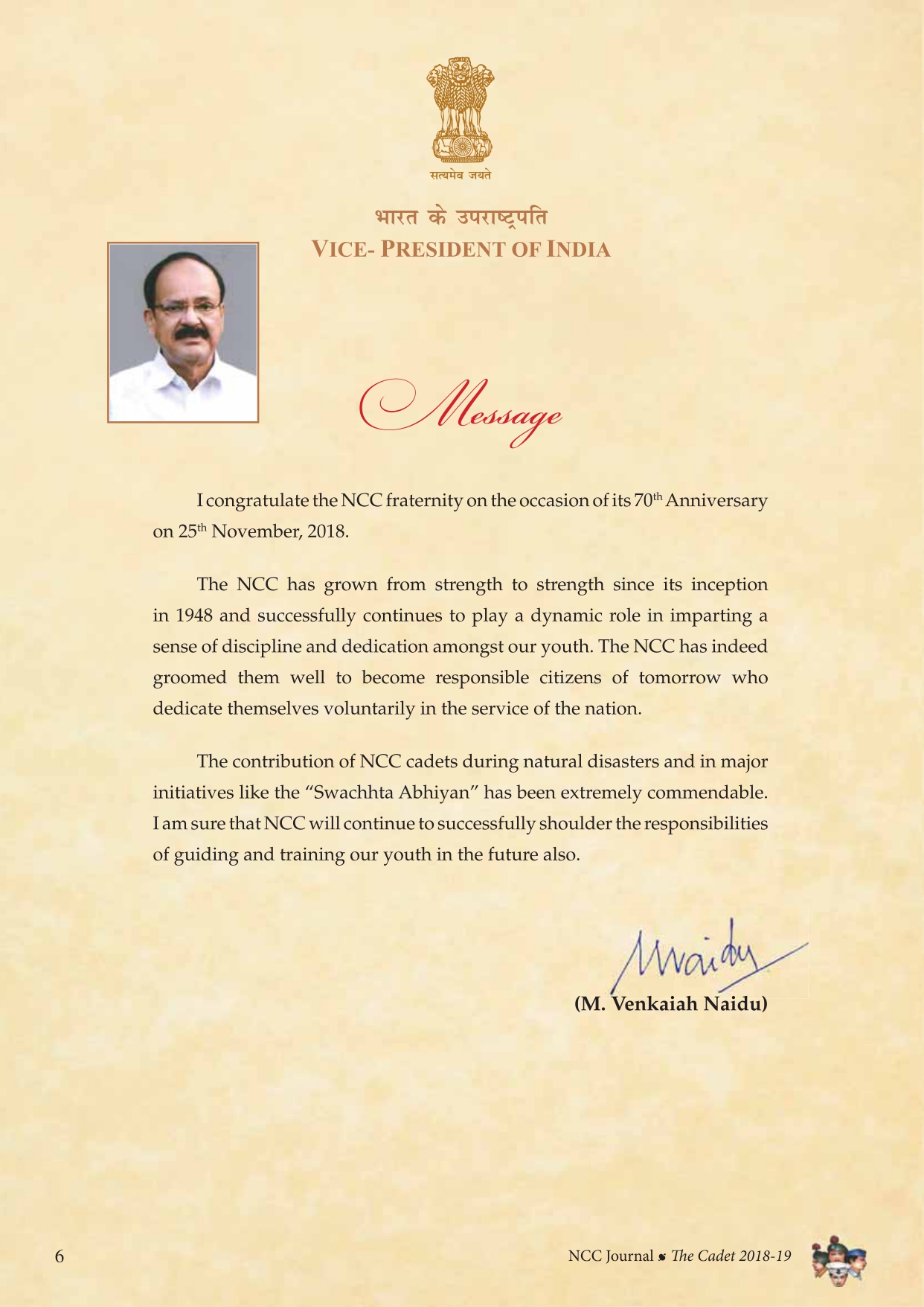 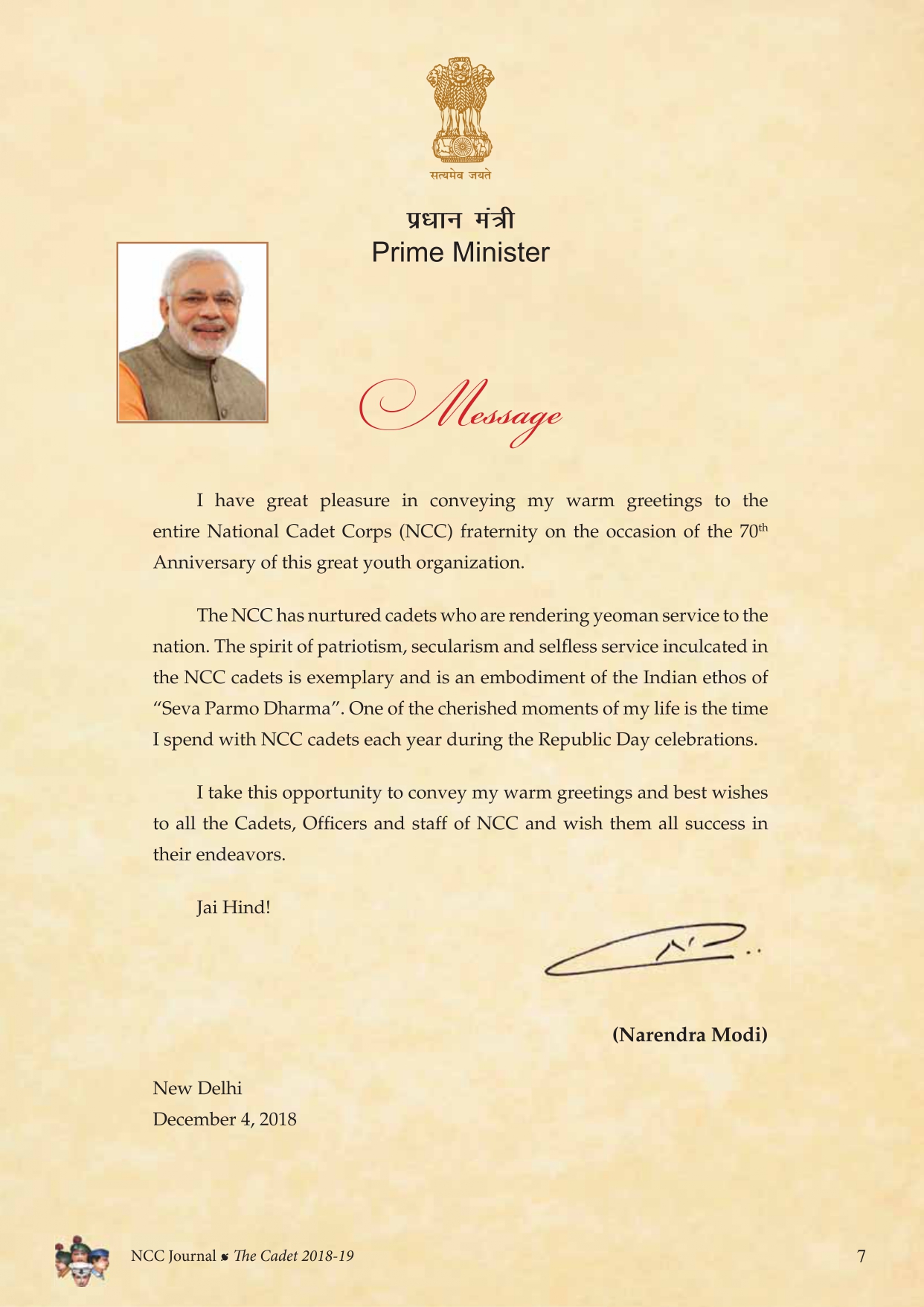 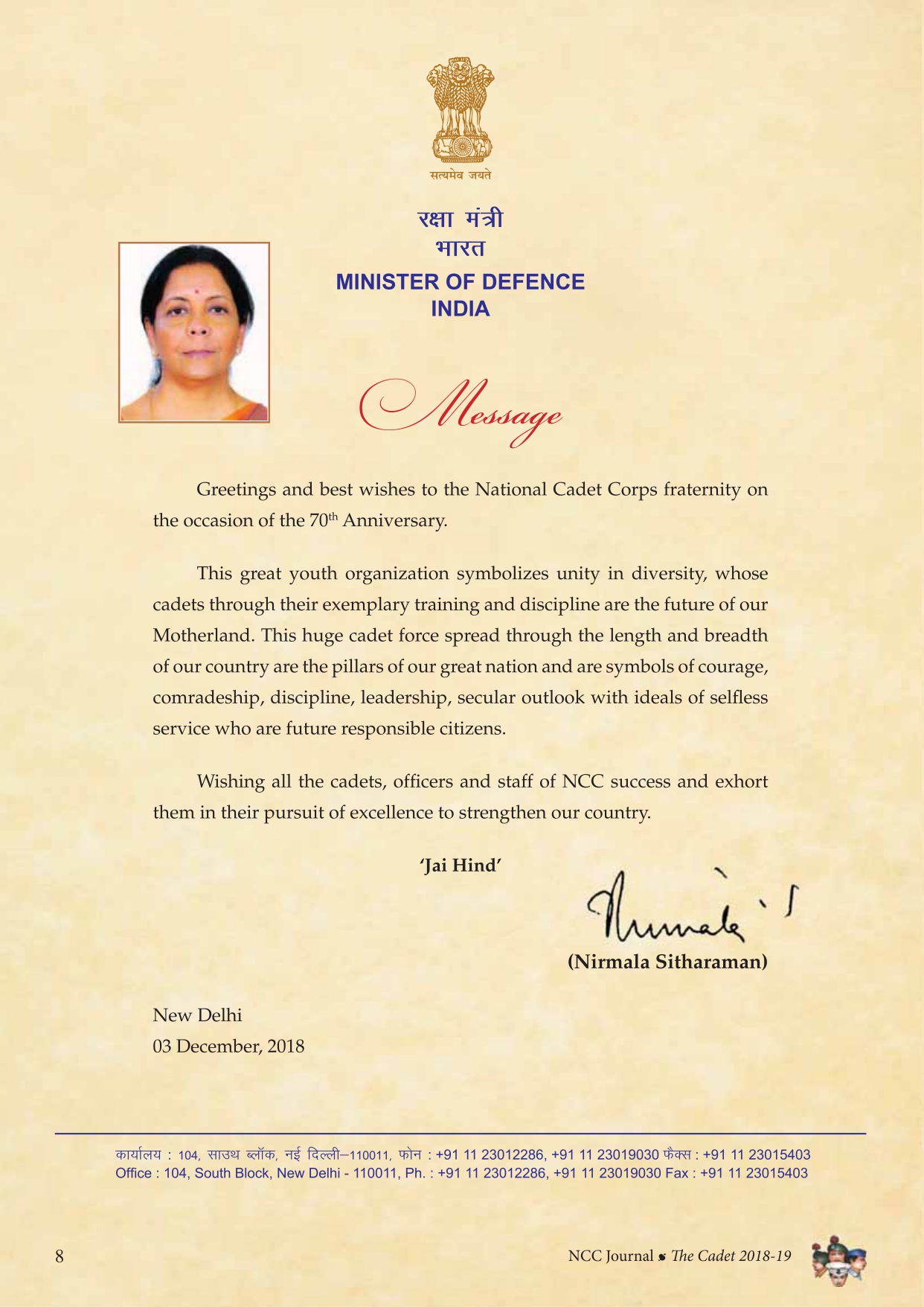 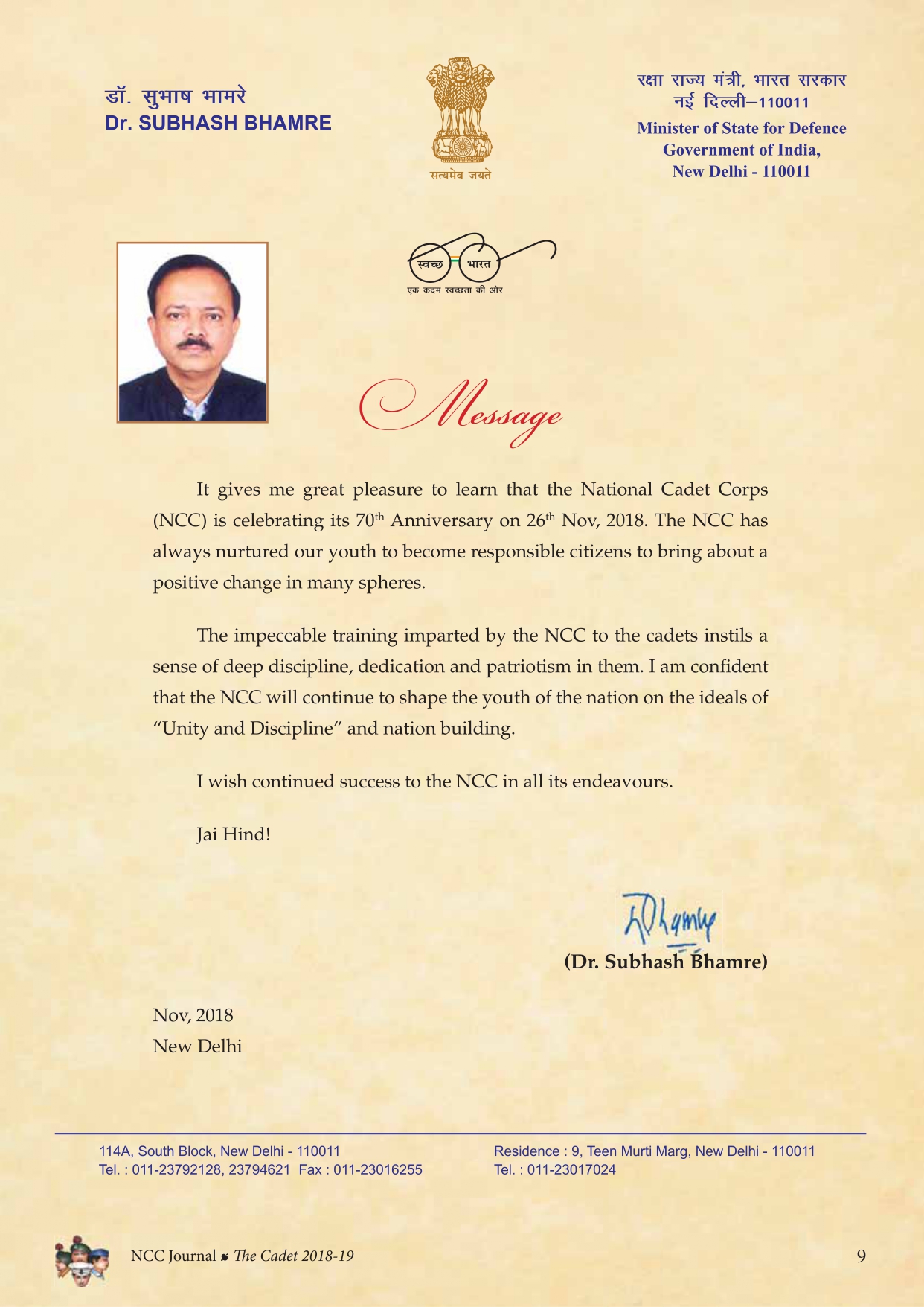 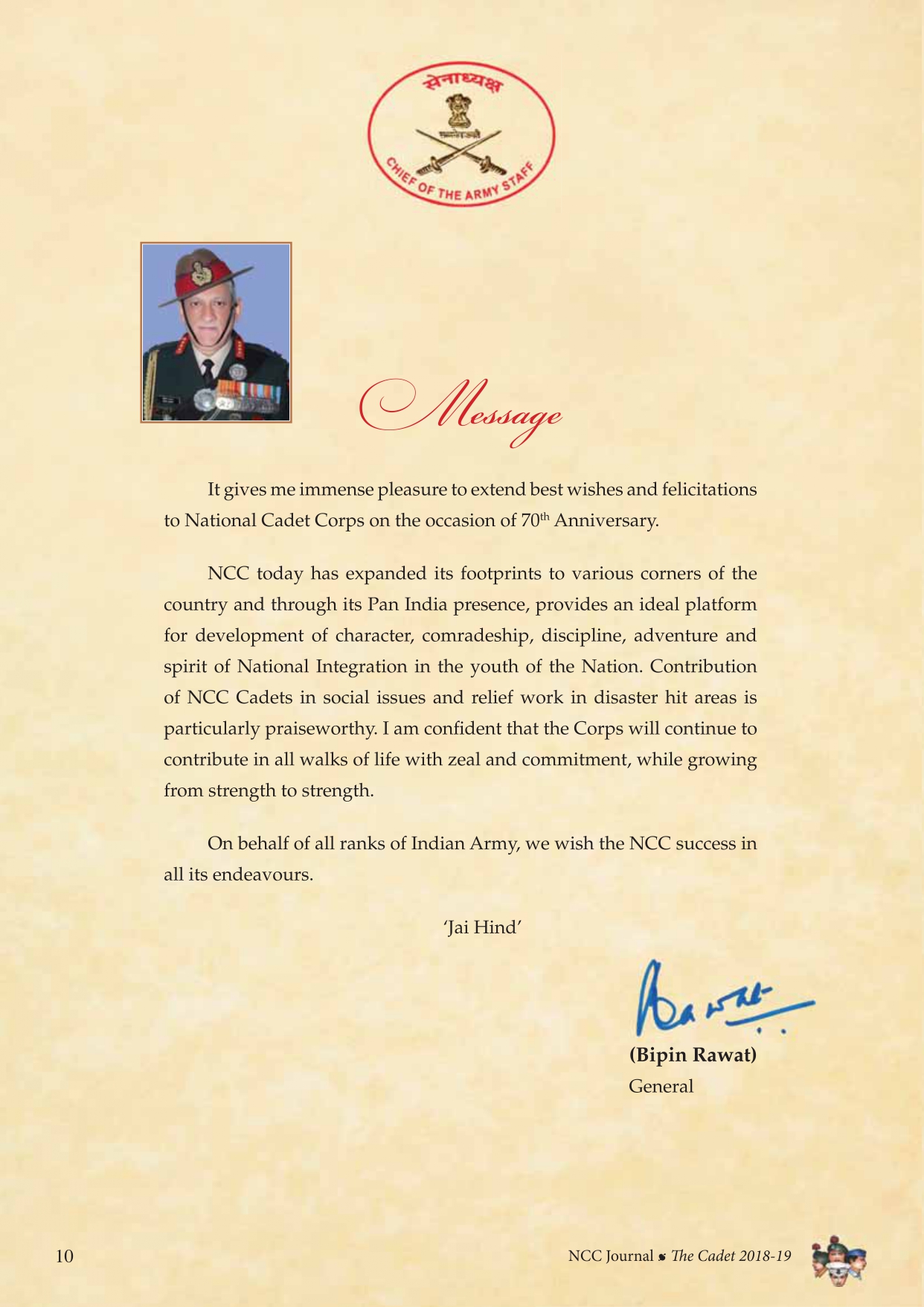 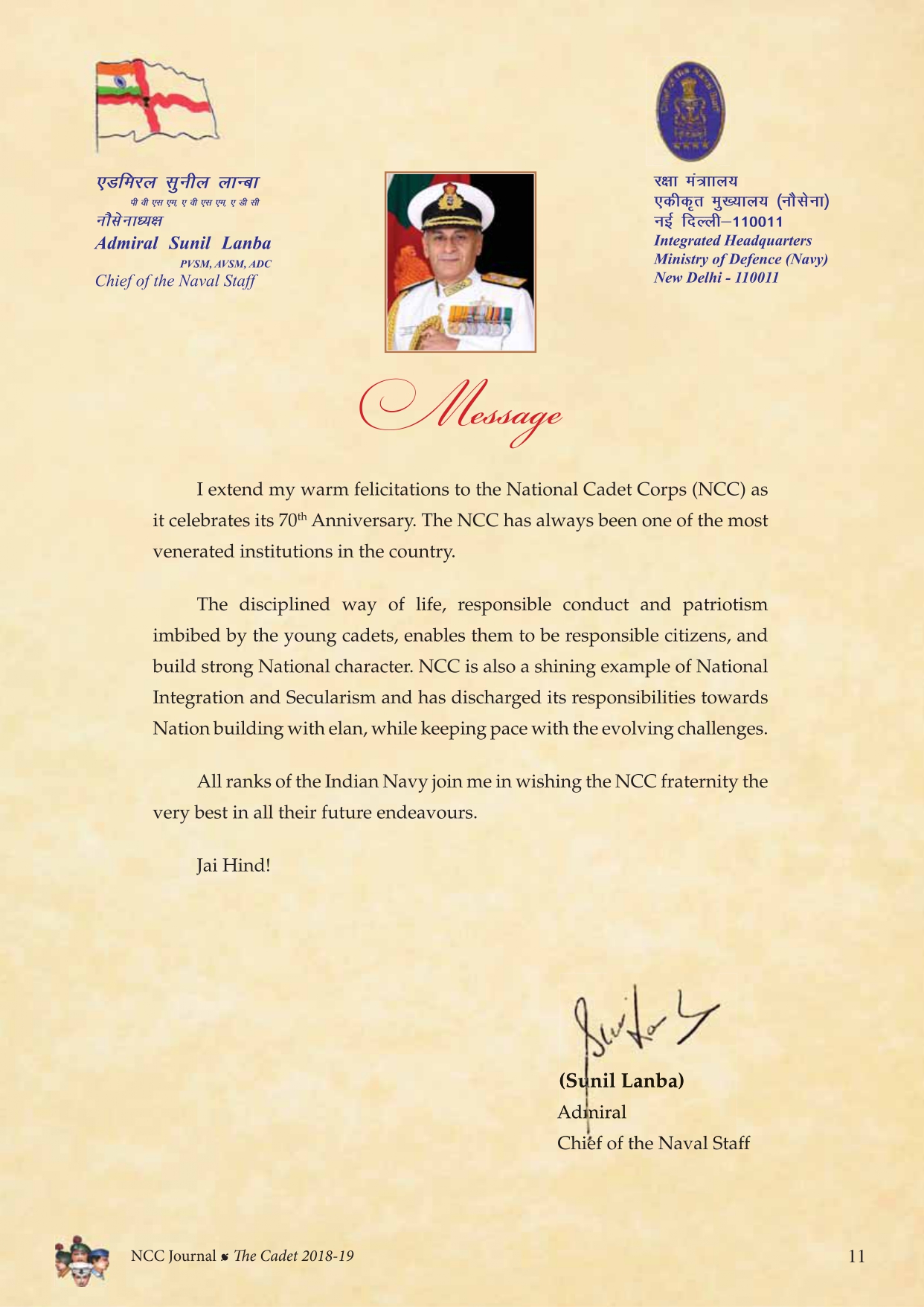 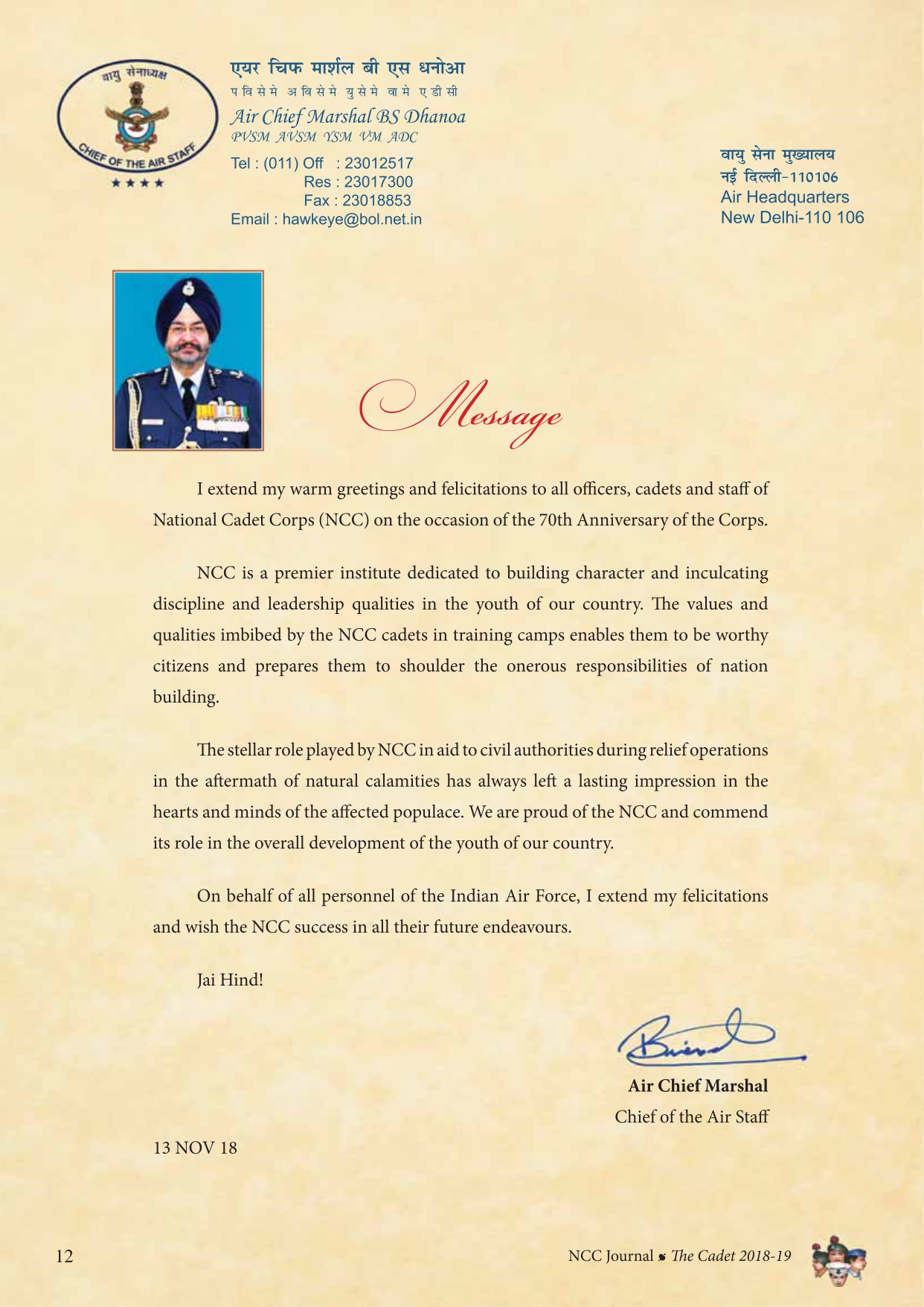 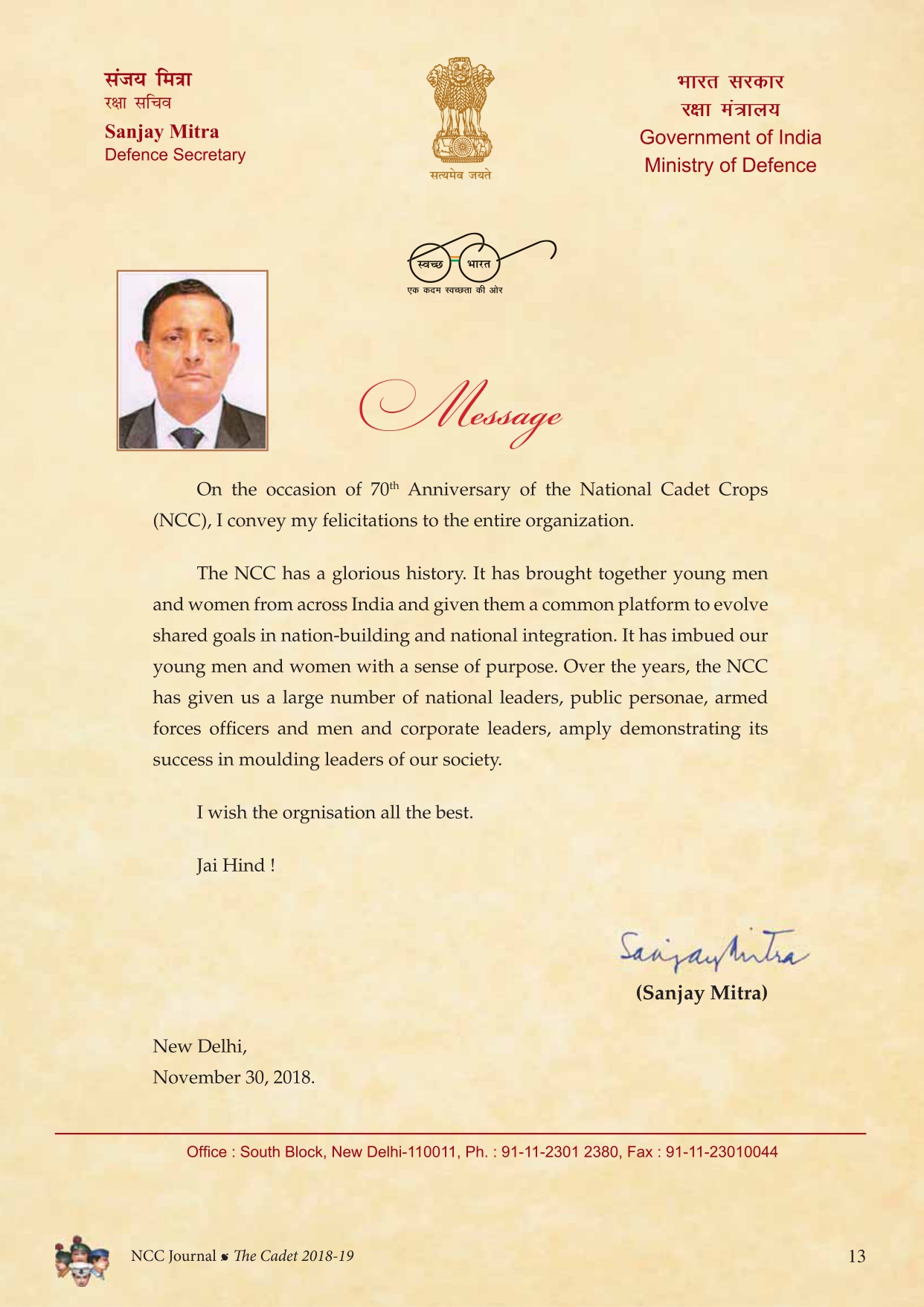 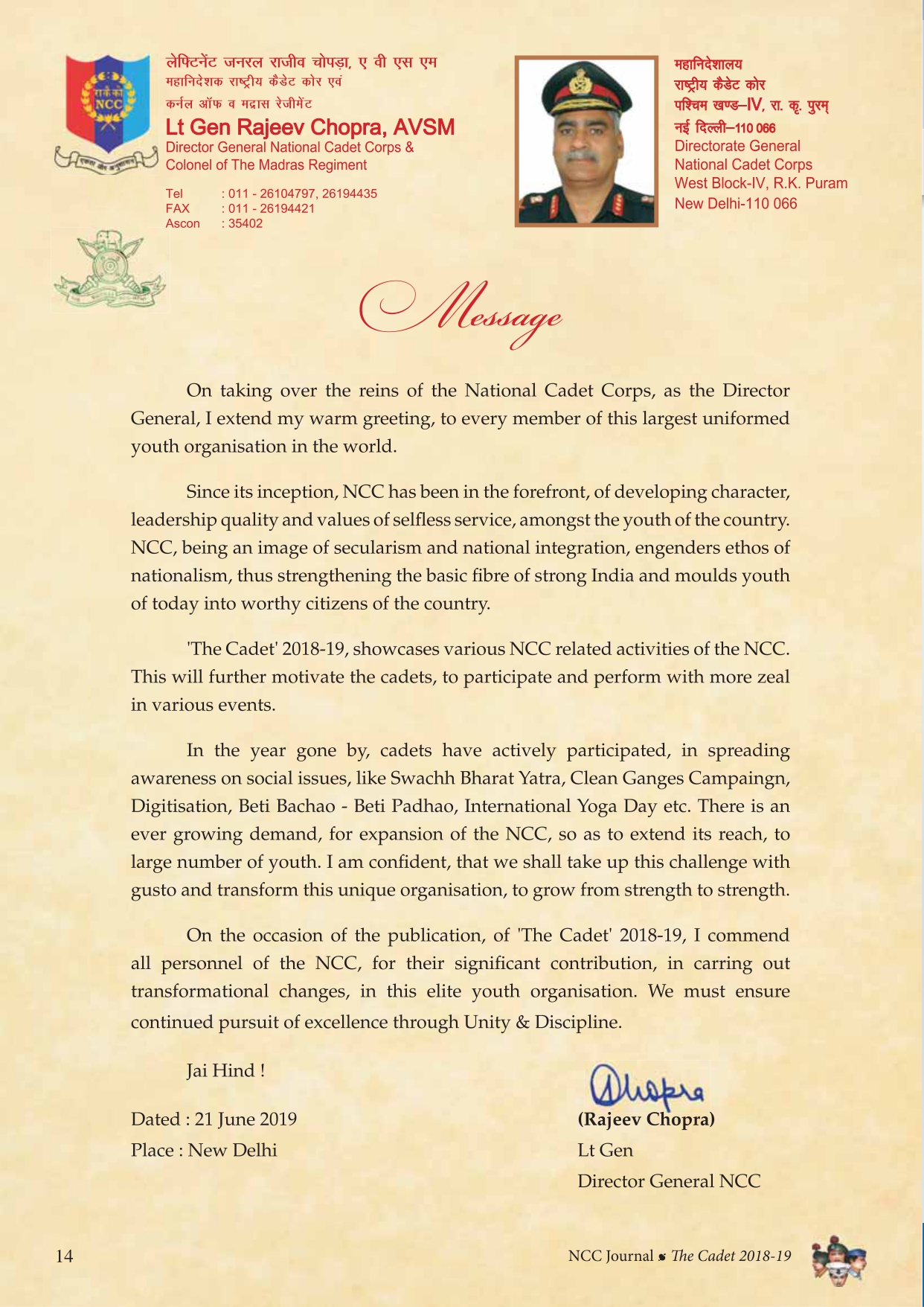 The NCC of Karpagam Academy of Higher Education had its dawn in the Chancellor   Dr.R.Vasanthakumar, Chief Executive Officer Shri K.Murugaiah, Vice-Chancellor Dr.M.Balasubramanian, RegistrarDr. P. Lakshmanaperumalsamy, NCC Officer Lt.K.P.Sridhar, Deans and Directors of the various departments. In the history of Karpagam Academy of Higher Education,08 August 2013 became a permanent milestone because of the NCC unit’s successful establishment. 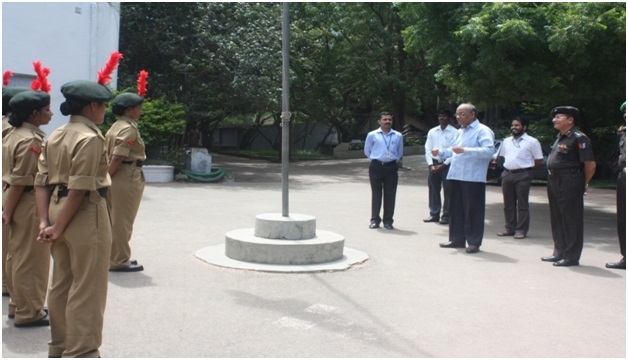 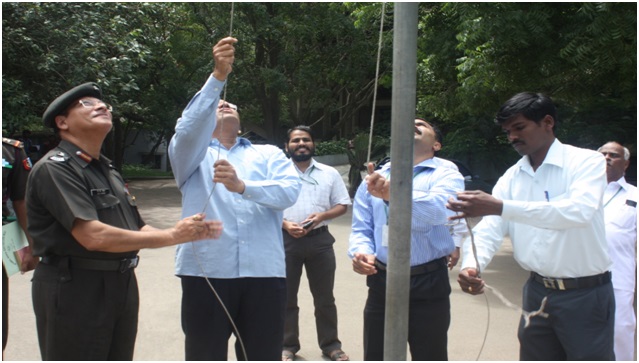 Officer in Order of Merit 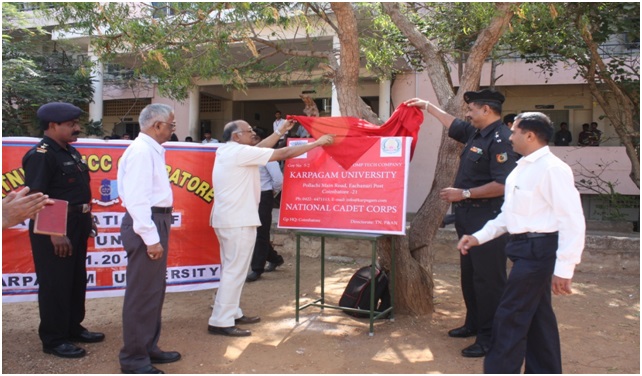 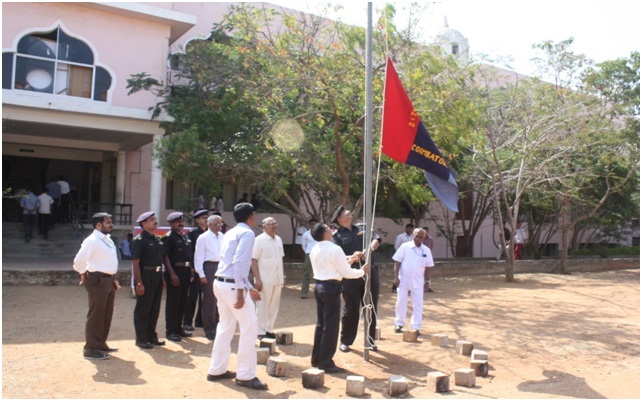 Officer in Order of Merit

Inauguration of Obstacle Course and Firing Range on 17/09/2013 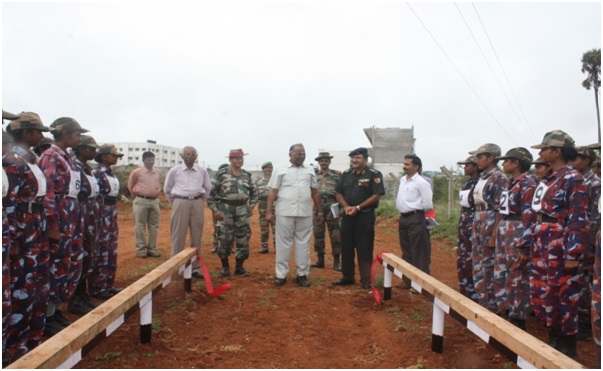 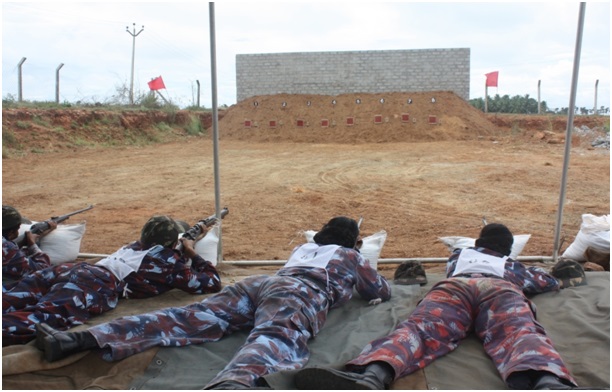 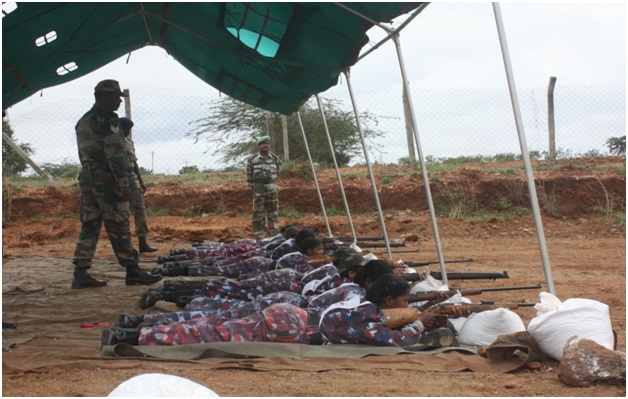 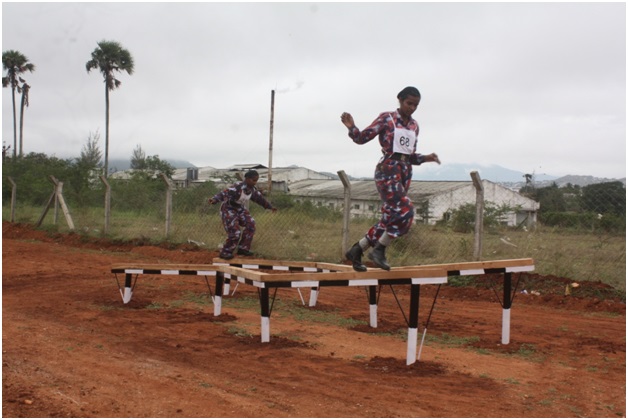 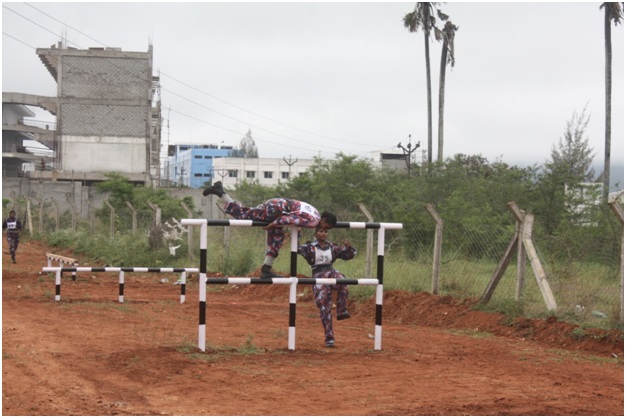